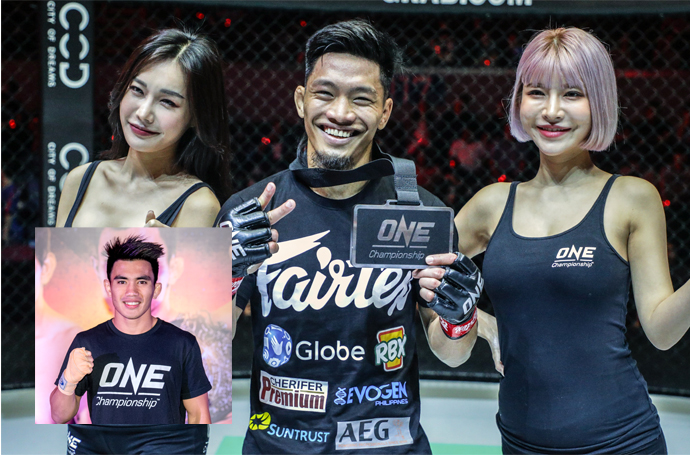 ONE Strawweight World Champion Joshua “The Passion” Pacio predicted a knock-out win for his comrade Lito Adiwang in the preamble of ONE: UNBREAKABLE on Friday night.

The top strawweight fighter believed that Adiwang will be prepared to whatever Japanese MMA Champion Namiki Kawahara will bring to the table.

“He’ll be fully prepared for any situation. At Team Lakay, we learn from our losses. Lito has levelled up his game and he’s ready to showcase how much better he’s gotten since his last fight. He wants to give fans a good show. I’m excited to see this matchup,” said Pacio.

“I think Lito wins this one by explosive knockout. Lito always comes to fight and he’s always looking for the finish.”

With only with a one-week notice, Adiwang will be facing a taller opponent who is adept at striking. Far from the initially scheduled Hexigetu of China who was shorter and more focused on takedowns.

Yet, the team accepted and Pacio was happy of the match-up.

“For me, this Lito Adiwang versus Namiki Kawahara is definitely a good match up. I think a lot of the fans are going to be entertained. It’s a good clash of styles and will be interesting to see who can impose his will. Of course, I have full confidence in my brother that he can take home the win,” said Pacio.

However, just like other fans Pacio reckoned that an Adiwang-Minowa rematch should be taken into consideration.

“If you ask me, I think the people are waiting for a rematch between Lito and Hiroba Minowa. That’s a fight that fans have been asking for since the controversial split decision last year. Even I’m super excited for that match. They have to run it back,” exclaimed Pacio.

Nevertheless, Pacio respects the judges’ card but wanted a clear victory – not one filled with controversy.

“A win is a win. It’s still different if you can clearly win a match. The majority of fans I’ve talked to thought Lito won. I did too. The only way to prove that is inside the Circle. I think after Lito beats Namiki, a rematch with Minowa is a must. You may think you’ve seen the best of Lito Adiwang, but I tell you the best is yet to come,” concluded Pacio.