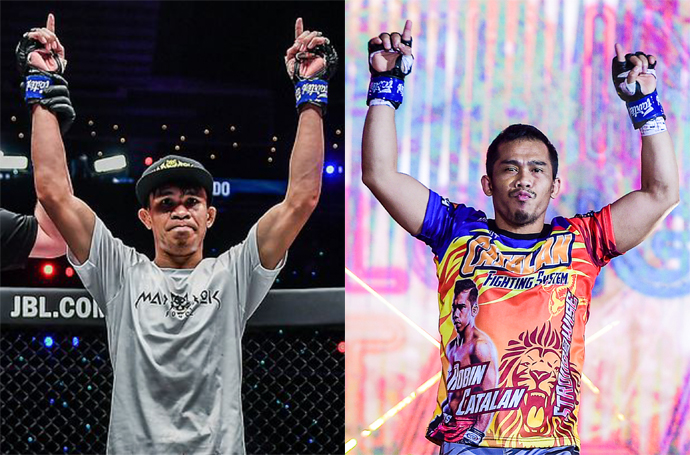 As much as Filipino fans are excited to see their favorite MMA fighters clash inside the Circle, Jeremy Miado and Robin Catalan will need to hold their horses for now as COVID-19 spoils their ONE Championship return.

Both Filipino sluggers have dropped out of their fights in ONE: HEAVY HITTERS due to the organization’s COVID-19 health and safety protocols.

Miado was supposed to lock horns with Japanese Senzo Ikeda in the main card for a chance to continue his win streak while Catalan was scheduled for Elipitua Siregar in his first fight in 11 months.

It’s a tough news as both Filipino fighters are looking to start 2022 with a bang.

“The Jaguar” was looking to extend his winnings and improve his 10-4 record, coming off an impressive second round technical KO against Chines Miao Li Tao proving that his first win was no fluke.

“I believe this happened for a reason. Yes, it’s unfortunate that as an athlete, all of our efforts in training camp went to waste. But I believe God has His own plans,” said Miado who found a new home at Marrok Force MMA in Bangkok.

With another win Miado was expected to be included in the strawweight list in the official ONE athlete rankings.

On the other hand, it was supposed to be a redemption match for Catalan who fell down to Ryuto Sawada after tapping to a rear naked choke in the first round of ONE: UNBREAKABLE III.

“This is a sad news because I was really ready for this match and I was excited to head back to the ONE Circle and get the win. Unfortunately, we have to take this news and go back home, but we promise that once everything is ok, I’ll go back to train to be able to fight again,” expressed The Ilonggo.

Due to the development, Ikeda and Siregar will now face each other in a strawweight showdown.

Also, among the cancelled fights include the co-main event match which would have seen Roman Kryklia defend his ONE Light Heavyweight Kickboxing World Championship against Dutch-Turkish challenger Murat “The Butcher” Aygun.