The Flash was helpless in front of the Sniper.

The new breed of Team Lakay fighters was on full display at Loman’s outing winning over Fernandes in striking and at the canvass, forcing the judges to give him the victory against the now #3-ranked bantamweight.

“The game plan went well. I was confident with my striking and wrestling,” said Loman at the post fight interview.

Loman’s usual right lead and low kicks set the distance between him and Bibiano preventing the latter from turning the fight into a grappling match.

Yet, unique enough, wushu-based Loman was also the one who initiated the ground tussle against BJJ-based Bibiano, but the former kingpin wanted to continue fighting up top in a striking battle.

Bibiano changed gears in the second round turning into attack mode, dropping Loman after catching his leg and landing a right straight. Fernandes gained the better position, attempting to end Loman with a rear naked choke however the Sniper defended himself regaining the top position in the ground fight.

The crowd roared as Loman made his move attempting to finish Bibiano with a ground and pound with 30 sec left on the clock of the second round, but Bibiano wouldn’t go down without a fight.

Loman continued his assault at the final round taking advantage of the already wore down Bibiano. He was able to take down the heavier fighter twice.

“I’m glad that I got the win. If there’ll be a chance, of course I will,” Loman humbly expressed after asked if he wanted to challenge the title next. 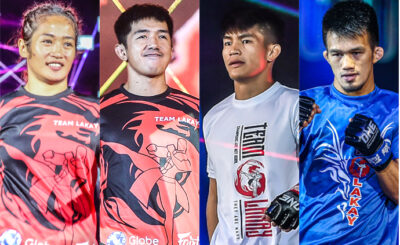