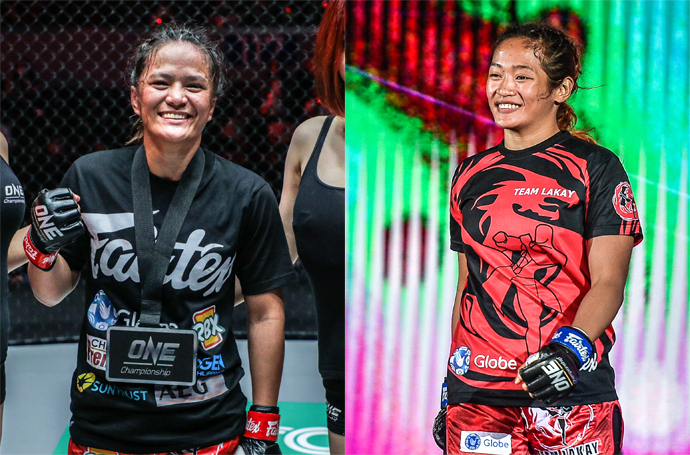 Like an older sister to her younger sibling, Team Lakay Gina “Conviction” Iniong is elated to see fellow Lakay Jenelyn Olsim compete at the highest form since her arrival at ONE Championships.

Making a name for herself, Olsim has been hoisting the flag for the women in the Baguio-based stable and Iniong is just proud to back her up in her climb to the top.

“Jenelyn has been showing great promise since she competed in ONE Championship. She won [her debut] in dominant fashion and I think at the rate she’s fighting now, we can see her challenging for a belt soon,” said Iniong.

While the male warriors of the stable have been dominating the attention, the few female fighters were all making a name for themselves.

And the pioneer Iniong is just overjoyed to witness the campaign of Olsim, seeing how far she has gone in her career.

“I can remember the first time I saw Jenelyn in the Team Lakay Gym and all I saw was a very hardworking and talented fighter. She listens to the coaches, and she absorbs everything in our training,” recalled Iniong.

“She just takes in all that information very well and understands the pointers that were given to her, and she really uses it to her advantage to get further and get better in her career.”

Going way back before Olsim shifted to MMA, the two were already representing the Philippines in various international events.

The most recent of which is the silver medal finish of Olsim in the women’s 54kg muay thai of 30th Southeast Asian Games back in 2019, which for Iniong may have boosted Olsim’s confidence.

“We were in different training camps, but because we’re both in Team Lakay, the connection will always be there. She is still a family to me even if we were in different disciplines in the SEA Games,” said Iniong, who for her part won the gold medal in the women’s lightweight category in kickboxing.

Truly, Olsim has enjoyed a supernova-like ascent after her run in the ONE Warrior Series.

After submitting Maira Mazar in her debut, the female phenom moves down to atomweight and is scheduled to face the always dangerous Bi Nguyen at ONE: BATTLEGROUND III on Aug 27.

Despite the changes in weight, Iniong is confident in Olsim’s muay thai background and equally improved ground game to end the night in her favor.

“Jenelyn is a well-rounded fighter. She has a great ground game and at the same time, she is also a muay thai fighter. Given this background, she can be creative inside the ring and adapt easily to the situation,” shared the 32-year-old fighter.

Having experienced the atomweight division for the longest time, Iniong gave Olsim some insightful advice ahead of her division debut.

“I just told her to play her game, stick to her plan, and trust herself. She has a great team and an amazing talent and skill set, and all she needs is to trust that and everything she worked hard for will all manifest inside the ONE Circle,” said Iniong.

“If Jenelyn continues to keep winning in the atomweight division, I think she can be a strong title contender.”