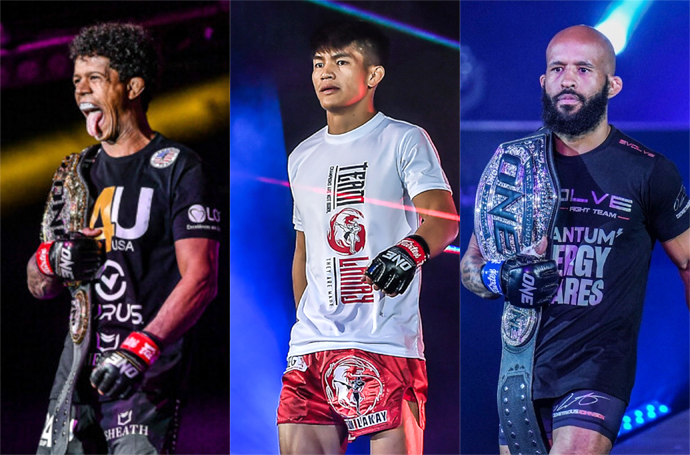 Team Lakay stalwart Danny Kingad recalls previous high-profile matches against ONE Flyweight World Champion Adriano Moraes and Demetrious Johnson ahead of their rematch at ONE: 161 on August 27 (Manila time).

After experiencing the grit of both fighters, Kingad believes that the second meeting of the two will be a close fight with both greatly improving since their 2021 clash.

“Adriano is now much better on his feet, he’s more comfortable on his striking compared to before. He usually favored his grappling in his previous fights, but he’s now moving better on stand-up scenarios,” shared the 26-year-old flyweight.

“DJ improves every day. He’s always working on something to get better, it’s almost impossible to see what his weaknesses are. He can also train with other elite fighters there abroad that’s why he’s always improving.”

Moraes first defended the ONE Flyweight World Title against Johnson at ONE on TNT I in April 2021 in a chess match of a fight. Both fighters had moments holding dominant positions but the fight largely happened on the feet.

The second-round saw, arguably, the most iconic knee strike in ONE Championship when Moraes cracked Johnson with a thunderous left knee to remain the flyweight king.

However, this time around, Kingad expects a different outcome. With Moraes still grinding at his home gym at American Top Team in Florida, DJ has joined has with former UFC rival Henry Cejudo.

“This rematch will of course be an exciting match. I think DJ’s been putting in the work because I saw on his social media posts that he’s been training with Cejudo. I think Cejudo’s been helping DJ in his training,” said Kingad.

“I really don’t know what will happen in this match, but I’m sure that this will be a great fight. There will surely be differences from their last match.”

Nonetheless, it will still be a clash worth watching, and just like every fight fan, no. 4 ranked Kingad will be keeping a keen eye on who will return home with the belt.