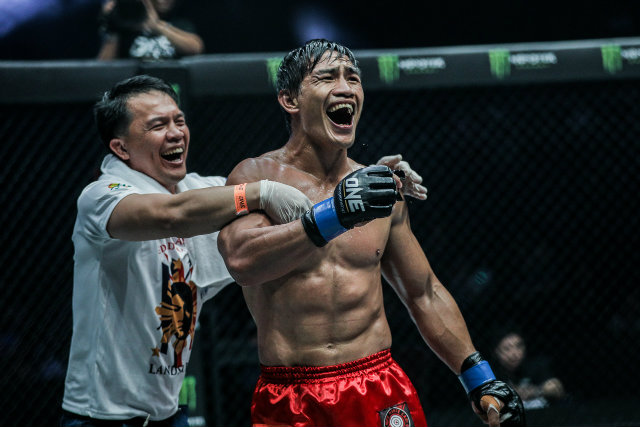 For Team Lakay’s fabled trainer Mark Sangiao, only time will tell for Eduard Folayang if he continues or not, as the legendary lightweight makes his return to the ONE Championship circle eight days from now.

Almost nine months since he was upset by replacement Pietr Buist, the Landslide knows that father time is slowly catching up with them, as they are already in Singapore for ONE Championship Inside the Matrix on October 30, with Folayang clashing with Antonio Caruso in what could be a make-or-break affair.

Sangiao knows that regardless of the opponent, their battle against the Aussie Spartan will be a key factor if the 35 year-old Folayang is still in the running in a loaded division in which he won the world title twice. The Landslide is currently outside of the top five as of the moment after losing three of his last four bouts.

“For us at Team Lakay, every fight, no matter how minor or major it is, it’s very important. This fight in particular is very significant for Eduard, as the result will dictate if he can get back in the list of top lightweight contenders,” he said.

Folayang will be on the same card alongside lightweight titleholder Christian Lee, as the hometown favorite put his belt on the line against the number one contender in Moldova’s Iuri Lapicus.

Win or lose, Sangiao still recognizes the pedigree of his prized fighter, who has been the poster boy of Team Lakay since ONE’s inception despite time is not even on their side as of the moment.

“As long as I can see Eduard being passionate and working hard for his career, I believe he can still get to the highest places in MMA,” he then said, as it also dispels talks and chatter about contemplating retirement.

“This fight will answer a lot of questions about Eduard, win or lose. But honestly, we’ve never even discussed his retirement. He still wants to achieve a lot of things in this sport.”

Antonio “The Spartan” Caruso, Eduard “Landslide” Folayang, Mark Sangiao, ONE Championship™ (ONE), ONE: Inside the Matrix, Team Lakay