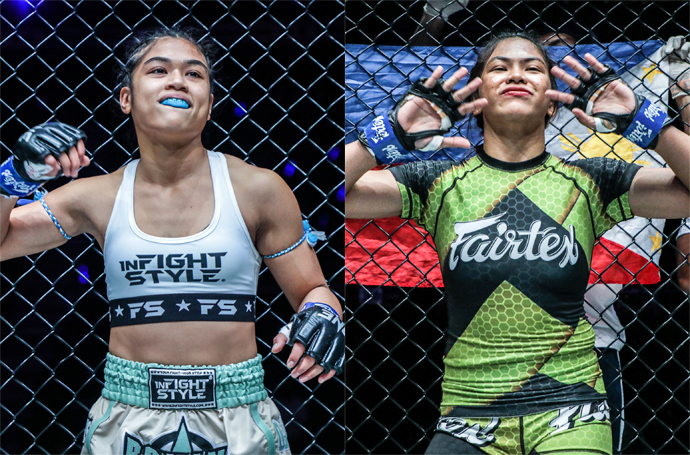 Jackie Buntan and Denice Zamboanga are ready to showcase the Pinay fighting spirit at the historic ONE: Empower this Friday, September 3, in Singapore.

The pair will see action in all-female ONE fight night where they will face separate foes in muay thai and mixed martial arts. Both Filipina strikers have unbeaten record in their ONE Championship careers.

With two wins on her belt already, the Fil-Am strawweight hopes to make it three straight when she battles Argentinian Daniela Lopez in the lead card of the event.

“We always go back to the drawing board, and see your mistakes,” Buntan said.

“I think from the last fight, I know where I felt short and I was able to really understand that and you know fix those flaws.”

On the other hand, Zamboanga will not just put her 8-0 record on the line, but also her top seed in the Atomweight World Grand Prix when she faces Seo Hee Ham in the quarterfinal.

The Lycan Queen admits that the South Korean will be the strongest fighter in the card, having been a veteran of the Ultimate Fighting Championship before.

“She’s the strongest opponent that I’ll be facing throughout my career, so I think this would be a hard fight for both of us,” said Zamboanga.

Despite the challenging nature of facing Seo, the top-ranked female atomweight is inspired further by the support she received from her compatriots, especially from Team Lakay’s head coach Mark Sangiao.

“For me it’s really overwhelming because a lot of people especially Coach Mark mentioned me to look forward to this Grand Prix,” Zamboanga later said.

“I think that will be, I feel so grateful because I’m bringing honor to the Philippines when I become champion.”

Denice “The Menace” Zamboanga, Jackielou Buntan, ONE Championship™ (ONE), ONE: EMPOWER