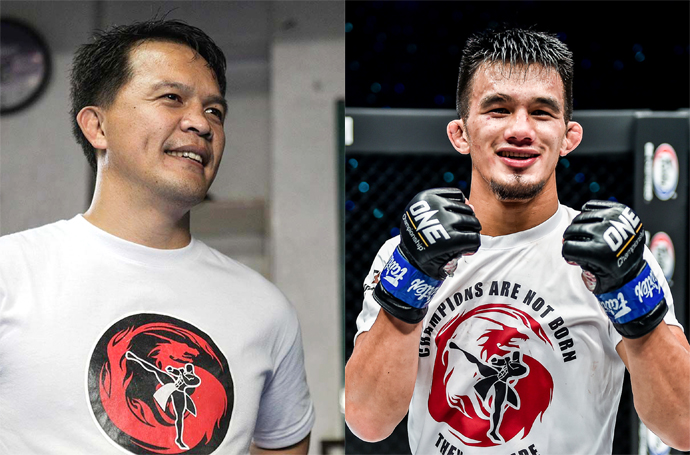 Mark Sangiao is happy to give his stamp of approval at Jeremy Pacatiw’s ONE Championship debut last Friday, July 30.

The 24-year-old stalwart’s hyperactivity truly worked in his favor, securing the win in his debut, and proving that he belonged in The Home of Martial Arts.

“He measured up to the expectations. He did great and his performance is commendable,” said Team Lakay head coach Sangiao.

However, if Coach Sangiao would have his way, a submission finish would even be better to mark Pacatiw’s arrival to the Singapore-based promotion.

Pacatiw surely desired that finish in his promotional debut, repeatedly going for takedowns as he actively hunted for submissions, attempting rear-naked chokes, guillotines, and even heel hooks against his Chinese foe.

“I would have wanted everyone to see his finishing prowess,” the decorated mentor stated on the heels of his ward’s unanimous decision win against “The Ghost” Chen Rui.

“We really wanted to submit Chen Rui in that match but The Ghost is not that easy to be submitted. If you watch the fight history of Chen Rui, you’ll see that he never submitted. But no question, it would have been a remarkable performance for Jeremy if he made him cave in.”

It was still a magnificent night for Pacatiw to which Sangiao agreed giving him decent yet still not perfect score.

“I would give him a solid eight out 10,” he said with his legendary cheeky smile.

“Let’s apply the universal 80/20 rule here. The 20-percent goes to the small but very important facets that he still needs to work on. It’s always good to have something left to polish and train on when he goes back to the gym. That lacking factor is a crucial force to keep refining.”

Being only at 24 years old, Coach Sangiao believes that Pacatiw still has a lot of changes to make to be able to consider himself as an elite fighter.

“The only thing that I want him to take from this fight were the small essential details, like what could he have done more. These details will depend on who he faces, so it’s a fight-to-fight thing,” he said. “If he’s to stand toe-to-toe with a grappler, then we have to work more on that. If his next opponent will be a striker, then we have to be a better striker as well.”

Sangiao also commended Pacatiw in following their gameplan, being active in the stand-up while being bullish in brandishing that improved ground game from the Igorot warriors.

“I’m really happy that Jeremy followed the game plan we prepared, and yes, this is also the new breed that we have been talking about,” Sangiao said proudly. “There is no special ingredient there but endless training, repetition and consistency.”

“It was really a statement win for Jeremy. He showed everyone that ‘The Juggernaut’ is a name they should remember and he’s here to stay,” Sangiao concluded.