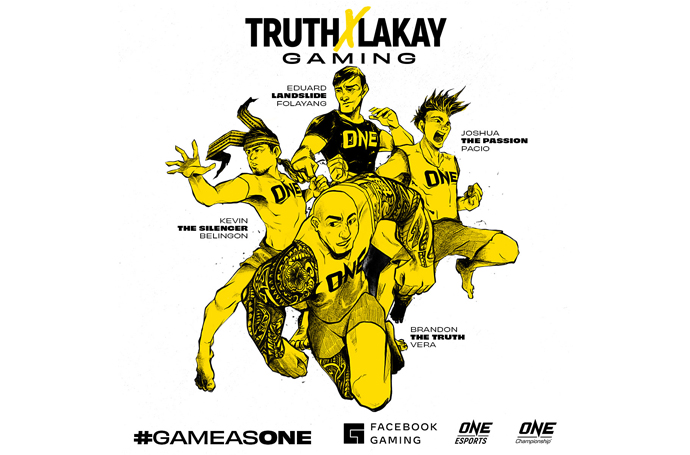 There is a surprising partnership between Team Lakay and reigning ONE World Heavyweight Champion Brandon Vera as two of the household names in Pinoy Mixed Martial Arts teamed up not inside the ONE Championship circle, but in Mobile Legends: Bang Bang online battle arena game.

They have been streaming their games on Truth x Lakay Gaming on Facebook which now has more than fourteen thousand likes as of the moment, opening another avenue to their fans who are also ardent gamers as well.

For the fighters from Baguio, it was a way for them to be mentally prepared for their upcoming battles.

Reigning strawweight champion Joshua Pacio is the most experienced gamer in the bunch, having been playing it two years ago as a casual way to pass time between grueling training sessions.

“I like it because it’s not just a game, it can teach you about teamwork, strategy, and sometimes patience, similar to MMA,” he said, as he became more serious playing ML when his gym mates got hooked in the game, most notably Kevin Belingon and Eduard Folayang.

Yet The Silencer was even cautious about it, as it can be addictive.

“I think it’s dangerously addictive. If you’re not careful, it can really take over your time,” said the former undisputed bantamweight king of ONE, in which he was even apologetic for his gameplay as he was a newcomer to the game.

For the Landslide, the game echoes what the Passion said about the benefits of Mobile legends, as he recognizes the role and the variety of their chosen heroes.

“I just started playing this game last March. I like it because it’s all about teamwork and there’s a certain uniqueness to every hero you play,” he said, in which he was even glad about hooking up with his followers online every time he plays.

Said Folayang, who is set to return at ONE: Inside the Matrix on October 30, “Some fans know it’s me they are playing with and they get excited. There’s also some trash talking going on in this game, it’s funny. But I think we all should respect each other always.”