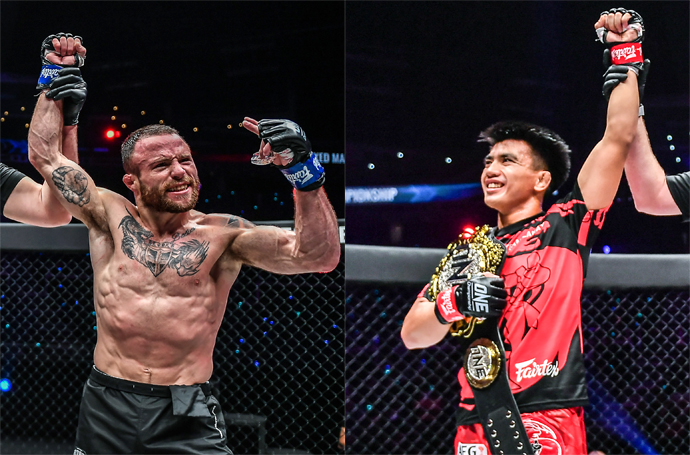 ONE Strawweight World Champion Joshua Pacio will finally meet Jarred Brooks inside the Circle as the two top strawweight fighters headlines ONE 158 on June 3 at the Singapore Indoor Stadium.

The Home of Martial Arts broadcasted the development last Friday as the Igorot warrior will be defending his golden plated strap against the No.1 contender.

And it will not be an easy night even for Pacio.

Brooks is a veteran fighter who is undefeated in his last fights including three under ONE Championship. He had already taken down some of the division’s toughest fighters including Pacio’s stablemate Lito Adiwang, Hiroba Minowa, and his latest victim was Bokang Masunyane just last month.

“I’ve been thinking, sleeping, and breathing the fight game for my entire life. And to win the belt would mean more than life itself. While I do think Joshua has some really great capabilities, I don’t think he has the same heart as me,” Brooks announced.

“He doesn’t have the same will and determination to win that I have. I will be the next ONE Strawweight World Champion, and my prediction is that I’m going to submit Pacio in the first or second round.”

But Pacio is used to Brooks’ trash talking.

The Passion has already proven that he is the undisputed kingpin of the division, losing only once in the last four years and capping the trilogy with Yosuke Saruta several months ago via technical knockout.

Pacio is ready to lock horns with Brooks.

“Philippines, we have the strawweight belt here in our beloved country. Soon, we’ll need to defend it against Jarred Brooks of the United States. I need your support and love to keep what is ours,” he said.

“This is Joshua Pacio, your champion, laban natin itong lahat (This is our fight).”