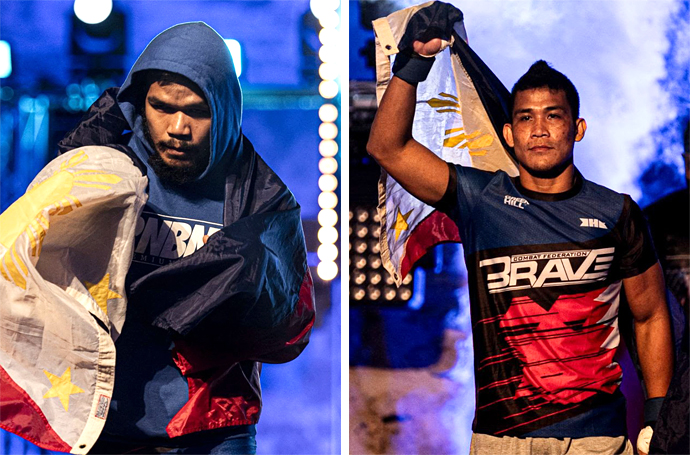 Filipino homegrown fighters in the Brave Combat Federation have expressed their serious intent to fight in the promotion’s first event in Belarus which is slated on June 4.

More than a month since losing to Kyrgyz opposition at BRAVE CF 47: Asian Domination, both Rolando Dy and Jenel Lausa are hoping to be in the historic BRAVE 51 in which it will be held at the Falcon Club Arena in the capital Minsk.

The son of the boxing legend Rolando Navarrete , Dy was denied a title shot at the Brave Lightweight currently held by Frenchman Amin Ayoub, when he was stopped by Abdisalam Kubanycheck at the main event last March 11 in Arad, Bahrain.

Despite the stinging second-round defeat, The Incredible admits there was nowhere to go but upwards as he learned more from their bout.

“I have no other options but to get back up. I know the loss to Kubanychbek will make me a better fighter. I learned a lot from this loss more than I learned from my wins,” said Dy.

“I will be ready for the next one. I hope I will be back in action very soon.”

Having not set foot in Europe in his life, the brawler from Dasmarinas, Cavite added that it was enticing to fight there to begin his road to redemption.

“Belarus is a great starting point of my road to redemption. I won’t think twice about taking that offer to fight in Europe.”

In the undercard of that fight night, the Demolition Man’s debut at Brave was dented when he went down to replacement opponent Ryskulbek Ibraimov, who dominated the bout in a unanimous decision win.

Like Dy, the Ilonggo was eager to get back on track in search of his first win at the said promotion.

“I think of it as a lesson. It will serve as an inspiration to push myself to the limit,” he said.

“I will triple my time in training. I’m not discouraged at all. I want to fight as soon as possible. Winning and fighting again will motivate me.”

For Lausa, fighting in Belarus means getting to know more about one of his inspirations in MMA legend Andrei Arlovski, who put them on the map after capturing the UFC World Heavyweight championship in 2005.

“I admire how he fights in the cage because he’s exciting and gives it all in every fight,” he conveyed about The Pitbull. “It will be a dream come true if I get to fight where he started his career.”