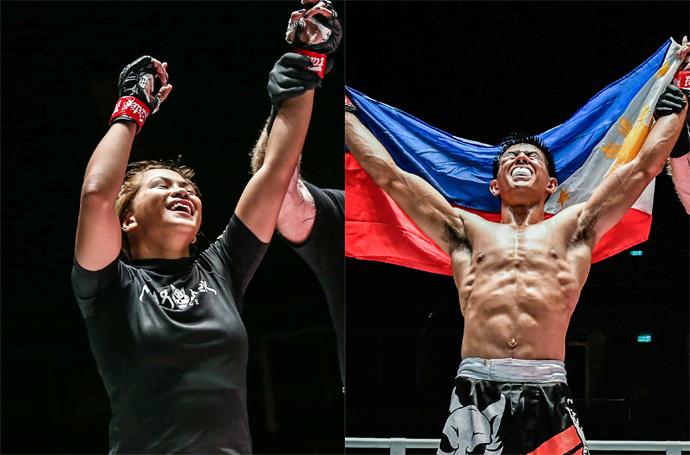 Denice and Drex Zamboanga made a massive statement in ONE: A New Breed Friday night in Bangkok, Thailand by securing submission wins over the hometown foes.

Already the third pair of siblings to set foot in the canvas of ONE, both fighters have stomped their class and cemented their credentials after stunning wins in the ring, which was held behind closed doors due to the threat of the Coronavirus pandemic.

More than a year since winning the URCC Bantamweight belt, the T-Rex made his ONE debut in style, sucking the air out of Detchadin Sornsirisuphathin in their flyweight encounter.

Drex made the most of his height and youth advantage to good use, giving the Thai virtually no chance in the bout, which ended right at the second-round bell with a rear naked choke that put Detchadin to sleep that forced Nick Chapman to halt the contest.

Right after that, her sister “The Menace” Zamboanga made quick work of Watsapinya Kaewkhong for her first third straight in ONE (5-0 overall) in their Atomweight tiff.

It only took 90 seconds for Denice to send a huge message to the Atomweight division, making the most of her size advantage to crush the Dream Girl with a keylock submission on the canvas.

“I’m very grateful that I won this fight because I fought the same card with my brother, we both win tonight. That’s why I’m so happy,” said the world’s top-ranked atomweight, who is targeting a tasty title bout with reigning ONE World Champion Angela Lee.

“I just came along and whatever she throws in the fight, I’m just be ready for that.”

Sandwiched between the twin MMA wins was the debut of Houston-bor KC Carlos, with the Pinay losing to Wondergirl Fairtex after the latter put her out in two rounds of their strawweight bout in Muay Thai.