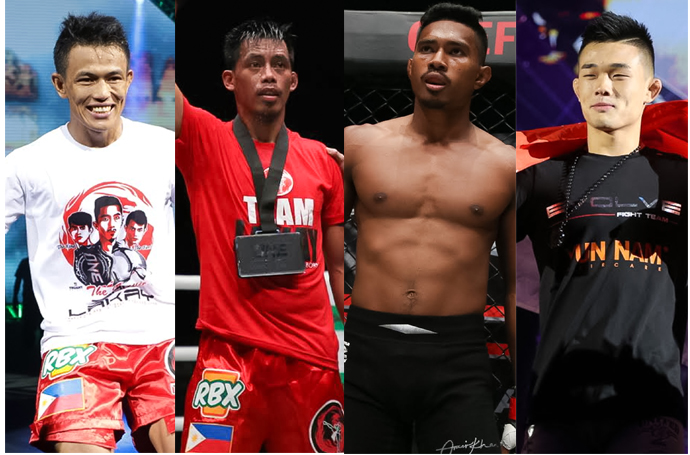 ONE Championship is set to rock China once again, as The Home of Martial Arts heads to Shanghai for ONE: BEYOND THE HORIZON on Saturday, 8 September, featuring a stacked card headlined by China’s own ‘The Panda’ Xiong Jing Nan defending her ONE Women’s Strawweight World Championship against Brazilian newcomer Samara ‘Marituba’ Santos.

The fans at the Baoshan Arena will also get to witness a showdown of sorts between two of Asia’s top martial arts stables, as the Philippines’ Team Lakay and Singapore’s Evolve MMA go head to head.

In the co-main event, former ONE Featherweight World Champion and top contender Honorio ’The Rock’ Banario of Team Lakay will take on talented Singaporean knockout artist Amir Khan of Evolve MMA in a lightweight contest.

Banario is gunning for his sixth-straight win and is in the mix for the ONE Lightweight World Championship, while Khan is coming off a knockout win and is looking to get his own winning streak going as well.

Both Kelly and Lee are looking to bounce back from respective losses and regain momentum in the talent-filled featherweight division.

Aside from their world champions, Team Lakay is also home to some of the promotion’s top-tier contenders including Kelly, strawweight star Joshua Pacio, and flyweight contender Danny Kingad to name a few.

With Team Lakay riding high once again coming thanks to their recent string of success, Banario and Kelly are looking to keep the momentum going when they take on two of Evolve MMA’s best.

“It’s going to be a tough challenge.” Banario said. “Evolve MMA has world class fighters and coaches. They have black belts in Brazilian Jiu-Jitsu, world champions in Muay Thai, they basically have everything in their gym. This will definitely be a good test for us.”

And when Banario says everything, it is by no means an exaggeration.

Long before Team Lakay’s rise to prominence, Singapore-based Evolve MMA has been dominating the combat sports scene not just in Asia, but in the world as well.

Regarded by many as the number one mixed martial arts gym in Asia, Evolve MMA is home to a who’s-who of world champions across various disciplines of martial arts.

Not to mention the stacked roster of contenders that they have, led by young stars like Lee and Khan, who are determined to prove why Evolve MMA is among the best in the world. They have the chance to do just that when they meet a pair of Team Lakay stars.

“Team Lakay is a great team and I have been friendly with them since the start of my career, however, my job is to go in there and take out whoever ONE Championship puts in front of me and this fight will be no different.” said Lee.

Making things even more interesting is the fact that ONE Championship Chairman and CEO Chatri Sityodtong recently lauded Team Lakay as the best team in Asia today, thanks to their impressive 2018 run so far.

“I have massive respect for all fight teams, but I believe there is no question that Team Lakay is now the #1 fight team in Asia today.” Sityodtong said in a Facebook post. “Despite a very modest budget and limited resources, Mark Sangiao has produced one of the best fight teams in the world. Every fighter on Team Lakay is a genuine monster with outstanding skills, unlimited cardio, and extraordinary gameness.”

For Kelly and the rest of the Baguio-based warriors, such praise from ONE Championship’s head honcho is a source of great pride and motivation.

“Hearing that from the boss, of course that makes us all very proud.” Kelly shared. “More than that, it makes us want to prove ourselves even more in our fights. We’re very thankful that Sir Chatri appreciates what we are doing here.”

For Banario, being recognized as the top team in Asia today isn’t a reason to rest on their laurels. The former champion knows that while they’re enjoying success now, the grind doesn’t stop there.

“We’re happy about what Boss Chatri said, but for us we don’t think about it too much. We just focus on improving and we want to keep improving as we move forward.”

“I know that everyone in Evolve MMA is also doing what they need to do to win, so for us, we also need to keep improving every day in training so that we improve in the fight.” Banario continued.

Sityodtong’s praise of Team Lakay is also serving as motivation for those like Khan, who are on the opposite side of the cage.

The Singaporean star hopes to be able to put an end to the Filipino stable’s hot streak, and he gets the chance to do that against Banario.

“I am certainly motivated to go up against a great team like Team Lakay. They are on a winning streak but hopefully I’ll be the one to put the brakes on their streak.”

“Many of my teammates at Evolve MMA are world champions and we intend to overtake them come 2019.” Khan added.

While Lee shares that he has nothing but respect for Team Lakay, once the cage door closes, it’s just him and his opponent.

“Team Lakay is a great fight team but when we step into that ring it will be me and Edward Kelly, no one else. It doesn’t make a difference to me what team any of my opponents are coming from.”

Amir Khan, Christian ‘The Warrior’ Lee, Edward “The Ferocious” Kelly, Honorio “The Rock” Banario, ONE Championship, ONE: BEYOND THE HORIZON