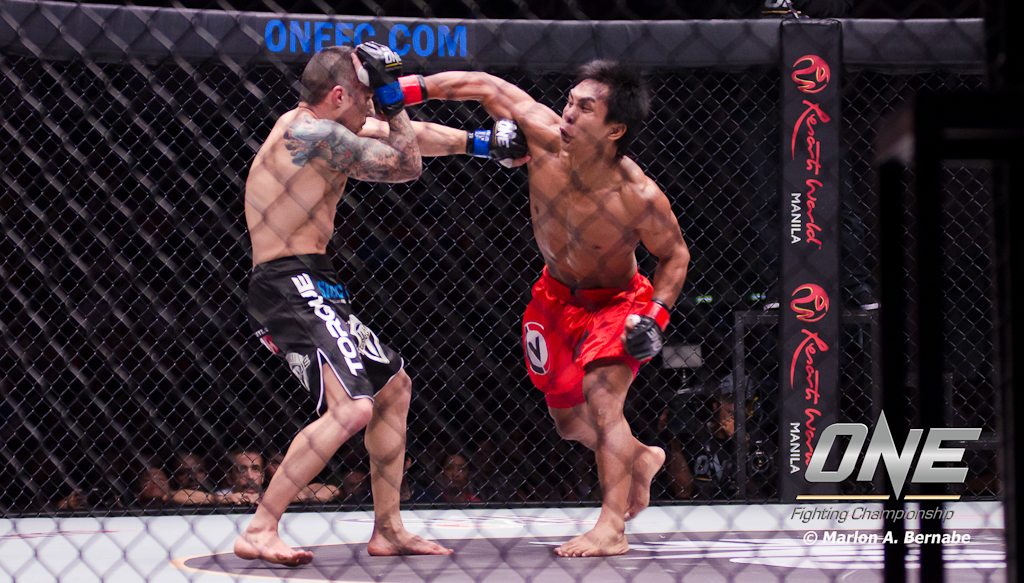 CEO of ONE Fighting Championship™, Victor Cui, stated, “ONE Fighting Championship is set to end the year with a blast by making ONE FC: WARRIOR’S WAY the biggest and most exciting MMA event of 2014! We have added some truly massive fights on the already astounding fight card. Team Lakay warriors Kevin Belingon and Honorio Banario seek redemption inside the ONE FC cage while Filipino-American Brandon Vera makes his debut. Fans can definitely expect an unforgettable night of world class and adrenaline-pumping mixed martial arts action! ” 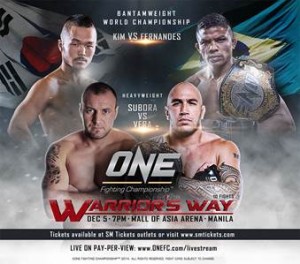 Koetsu Okazaki worked his way up the ranks of Shooto by dominating all opposition and earned the Shooto World Championship belt as a featherweight. He has never been knocked out or stopped with strikes due to his excellent chin and ability to take a punch. Okazaki is looking to continue his win streak by defeating Kevin Belingon to move up the ranks and work his way to another shot at the Bantamweight title.

Kevin Belingon is arguably one of the best bantamweights to hail from the Philippines, renowned for his striking ability while possessing incredible speed and power. He can get in and out of range without being taken down or countered and can inflict serious damage with just a single strike. To top it off, Belingon has some of the most dangerous kicks in the entire division, rounding things out with explosive takedowns and devastating ground-and-pound. Belingon is set to come back stronger this time against Okazaki in front of his home crowd. 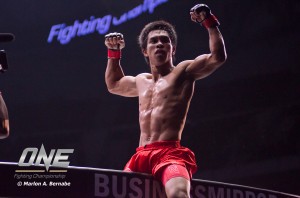 Honorio Banario has a record of 8-4 and is hungry for a win, with the ultimate goal of landing another shot at ONE FC gold down the road. Known for his aggressive yet calculated approach to striking, Banario will need to overcome the toughest challenge of his career against Brazilian featherweight standout Herbert Burns before he can consider himself back in the running for the ONE FC Featherweight world title. 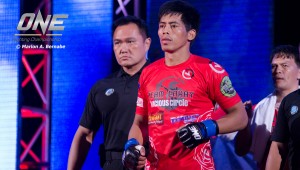 Herbert Burns is one of the top Featherweight prospects in ONE FC with a penchant for locking in fight-ending submissions. With his strong background in Brazilian Jiu-Jitsu, Burns is widely considered the top contender in his division and is on the fast track to getting a shot at the ONE FC Featherweight title. He is extremely driven to win the belt to prove to fans all over the world that no one can get in his way.

Newly signed Roger Gracie will make his debut at ONE FC: WARRIOR’S WAY against contender, James McSweeney. Roger is one of the greatest Brazilian Jiu-Jitsu practitioners of all time and is part of the world famous Gracie fighting family, the originators of Brazilian Jiu-jitsu. He is undeniably one of the most skilled grapplers to transition into mixed martial arts and is looking to showcase his world-class technical acumen when he competes in Asia for the very first time.

Challenging Roger Gracie in this exciting light heavyweight bout is British fighter, James McSweeney, who is coming off a series of wins since his debut in ONE FC. Nicknamed ‘The Hammer’, McSweeney is menacing in the cage and will look to completely destroy his opponent to prove that he is the top fighter in the ONE FC light heavyweight division.

Since transitioning into mixed martial arts, former collegiate wrestling standout Jake Butler has amassed four victories with only one defeat and has exhibited some of the finest wrestling skills seen in professional mixed martial arts competition. Butler uses his elite wrestling pedigree to control opponents on the ground and in the clinch, where he does most of his damage by assuming dominant position and unleashing powerful strikes. Butler has been waiting for a rematch against Sylvain Potard to avenge the only loss on his otherwise unblemished record. ONE FC: WARRIOR’S WAY is the perfect opportunity for Butler to even the score.

French fighter, Sylvain Potard has a record of 7-4, with one of those victories being a memorable one-punch knockout of Jake Butler at ONE FC: TOTAL DOMINATION. In a highly-anticipated rematch, Potard will enter the ONE FC cage with Butler, this time, to prove his first victory was no fluke. A victory here will reinstate that he is the better fighter of the two. Both Potard and Butler have a lot riding on this matchup and fans will not want to miss the action.

Fans around Asia can catch all the action live on FOX Sports 3. Check your local listings. Also, fans from around the world can witness the action online via live streaming at http://www.onefc.com/livestream. The event will be available for purchase at just US$9.99.