ONE FC: WARRIOR’S WAY BRINGS THE BEST LOCAL AND FOREIGN MMA FIGHTERS TOGETHER IN ONE NIGHT ON DEC. 5

ONE FC fans can look forward to a spectacular evening on December 5 as
it brings together the best of local and foreign MMA fighters under one
roof at SM Arena.

Big-named MMA fighters such as Brandon Vera, Ana Julaton, Eduard
Folayang, Roger Gracie, James Mc Sweeney; to name a few, all promise an
action-filled night for their fans.This event is one of the most star
studded mixed martial arts event to date and gives the Filipino mixed
martial artists a chance to prove that they can compete with some of the
best in the world.

Seven Filipino mixed martial artists are slated to take on foreign
opponents on the card, including top stars Eduard Folayang and Brandon
Vera.There will be no guarantees though as the foreign opponents
represent some of the sternest tests in their respective weight classes. 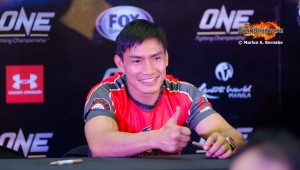 In the preliminary bouts, Tharoth Sam and Dejdamrong Sor Amnuaysirichoke
are coming off victorious in their last bouts and will prove to be a
litmus test for the skills of Jujeath Nagaowa and Rene Catalan
respectively. Boxing world champion Ana Julaton also looks to get back
to winning ways when she takes on fellow striker Walaa Abbas from Egypt.
All three foreign opponents in the preliminary bouts bring impressive
striking credentials, with Tharoth Sam a khmer boxing icon in Cambodia
and Dejdamrong Sor Amnuaysirichoke a former Lumpinee champion, the
highest honor for a Muay Thai practitioner.

The illustrious fighting trio out of Team Lakay also have difficult
challenges to overcome. Brazilian Jiu-Jitsu world champion Herbert Burns
will take on Honorio Banario, while Kevin Belingon have to face Japanís
Koetsu Okazaki. Burns have been on a tear since joining ONE FC, reeling
off three victories. Okazaki meanwhile, put on the performance of his
career in stopping Russiaís Yusup Saadulaev in Taiwan earlier this year.
Banario and Belingon have put on spirited performances but both of them
have lost their last bouts, and this will be an opportunity to bounce
back with a statement victory. The last member of the group, Eduard
Folayang, will take on Timofey Nastyukhin. Becoming the first person to
defeat the currently undefeated Russian will be a feather in the cap for
Folayang, and will further enhance calls for him to get a ONE FC World
Championship opportunity in the future.

Fil-Am MMA superstar Brandon Vera is also set to make history as he
fights in Manila for the first time in his decade-long career. A huge
fan favorite in the Philippines, he will take on Ukraineís Igor Subora.
Fans will be torn as Subora has also made the Philippines his home and
he made a name for himself in the local circuit in the country. This
clash of heavyweights promise to be an exciting affair and will cap off
the Filipino representation in ONE FC: WARRIORíS WAY with a bang!