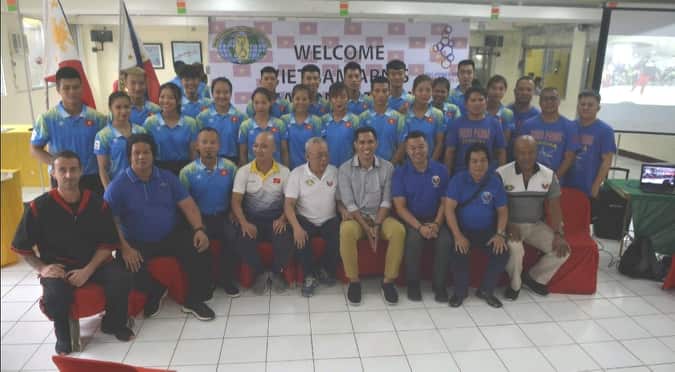 CEBU CITY—Team Philippines is gunning for an impressive showing when Arnis competition makes its debut as a regular sport in the 30th Southeast Asian Games slated Dec. 1-3, 2019 at the Angeles University Foundation in Clark, Pampanga.

“There are 20 gold medals at stake and we are confident that we can win the bulk of the medals,” said Canete.

Canete said the 20-man Team Philippines was formed through a series of qualifying tournaments held in various places in the country.

“We have men’s and women’s teams with each squad composed of 10 players. It’s just right that we have a national team for our national sport,” Canete pointed out.

In the upcoming competition, the Philippines will go up against Vietnam, Cambodia and Myanmar.

Interestingly, the 21-man Vietnamese team is in Cebu City to train in preparation of the SEA Games.

“It just shows that the Philippines is being looked up to by other countries when it comes to arnis. This training by Vietnam in our place will definitely promote Cebu City as arnis hub in global stage,” said Canete.

Gatbonton said his players will definitely learn a lot in Cebu City sojourn.

“Training in Cebu gives us a complete package. It’s very convenient and the resources are here,” said Gatbonton.

Vietnam is composed of Pencak Silat players who are looking to make a big splash in the Arnis competition.

“The endurance is there since they are Silat players. We just have to fine tune are skills when it comes to arnis,” Gatbonton said.

Cebu City Councilor Dondon Hontiveros, who was on hand when the Vietnamese squad was presented to the media, welcomed Vietnam’s decision to hold its training in Cebu City.

“Cebu City, through the Cebu City Sports Commission, is ready to support for the promotion of arnis in the city,” Hontiveros said.