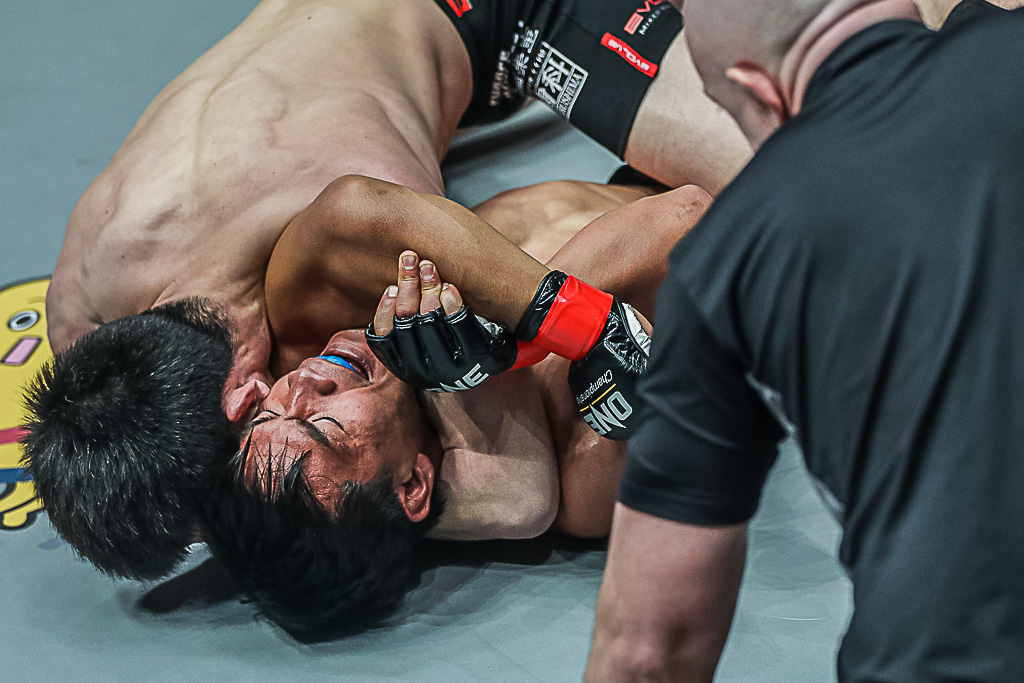 Tokyo, Japan: The largest global sports media property in Asian history, ONE Championship™ (ONE), put together a historic evening of world-class martial arts at the iconic Ryogoku Kokugikan in Tokyo. ONE: A NEW ERA delivered a collection of compelling matchups and exciting finishes. In the main event, Shinya “Tobikan Judan” Aoki of Japan submitted Eduard “Landslide” Folayang of the Philippines to be crowned the new ONE Lightweight World Champion.

Japanese mixed martial arts legend Shinya “Tobikan Judan” Aoki put on a masterful display of grappling dominance as he submitted Filipino icon Eduard “Landslide” Folayang to be crowned the new ONE Lightweight World Champion. After flashing a high kick, Aoki shot in for a single leg and put Folayang on the mat with a takedown. He then swiftly transitioned into an arm-triangle choke from half guard. Aoki tightened his squeeze and put Folayang to sleep before celebrating the victory in front of his hometown crowd.

Defending ONE Women’s Strawweight World Champion “The Panda” Xiong Jing Nan of China continued her reign of dominance over the division after defeating challenger “Unstoppable” Angela Lee of Singapore by TKO in the fifth and final round. Lee was aggressive and had Xiong in a number of dangerous submission attempts, but the champion was lighting Lee up on the feet the entire bout. In the final round, Xiong punished Lee with hard kicks to the midsection and fierce punch combinations that forced the referee to intervene and award Xiong with the stoppage win.

Myanmar’s Aung La N Sang successfully retained his ONE Middleweight World Championship with a spectacular second-round TKO victory over Ken Hasegawa of Japan. Aung La N Sang was dominant all throughout the bout, punishing Hasegawa with an arsenal of powerful punches and thunderous kicks. A stiff right straight from Aung La N Sang late in the second round spelled the beginning of the end for Hasegawa, as the defending champion followed up with ground-and-pound to score the finish in dominant fashion.

An unfortunate sequence of events turned in the ONE Bantamweight World Title clash between champion Kevin “The Silencer” Belingon of the Philippines and former titleholder Bibiano “The Flash” Fernandes of Brazil. Fernandes, who was in the driver’s seat after two rounds of action, landed a takedown in the third round but was left unable to continue after Belingon connected on a flurry of illegal elbows to the back of the head. Belingon was shown a Red Card and was automatically disqualified. Fernandes was then awarded the ONE Bantamweight World Title.

In a ONE Flyweight World Grand Prix quarter-final contest, 12-time Flyweight Mixed Martial Arts World Champion Demetrious “Mighty Mouse” Johnson of the United States made a successful ONE Championship debut as he submitted Yuya “Little Piranha” Wakamatsu of Japan. Although Wakamatsu would land a few clean punches to keep Johnson on his toes, the American showcased his impeccable grappling skills to transition from one position to the next with relative ease. After grabbing a hold of Wakamatsu’s neck in the second round, Johnson secured a deep guillotine choke to force the tap.

Russia’s Timofey Nastyukhin welcomed Eddie “The Underground King” Alvarez of the United States to ONE Championship, finishing the former 4-time Lightweight Mixed Martial Arts World Champion inside of the first round of a ONE Lightweight World Grand Prix quarter-final bout. After a few brief exchanges at range, Nastyukhin closed the distance and hurt Alvarez with a left straight, sending him reeling towards the cage fence. Nastyukhin then unloaded a barrage of punches as Alvarez covered up before the referee called a halt to the contest.

In a ONE Super Series Kickboxing contest, Muay Thai legend Yodsanklai “The Hero” IWE Fairtex put on a dominant performance in his highly-anticipated rematch with the Netherlands’ Andy Souwer, knocking out his rival in the second round. The first round saw fierce action from the opening bell, with Yodsanklai dropping Souwer early. Towards the end of the round, the Thai warrior hurt Souwer again and nearly finished him. Less than a minute into the second round, and Yodsanklai put on the finishing touches as Souwer hit the canvas for the last time.

In a ONE Flyweight World Grand Prix quarter-final bout, former ONE World Title challenger Danny “The King” Kingad and Pancrase Flyweight Champion Senzo Ikeda figured in an intense war of attrition for three whole rounds. It was an incredible performance from the two amazing athletes, as they both showcased their full repertoire of skills. In the end, it was Kingad who was awarded a close unanimous decision victory for his efforts.

In a ONE Flyweight World Grand Prix quarter-final bout, former ONE Flyweight World Champion Kairat Akhmetov of Kazakhstan overcame a spirited effort from Reece “Lightning” McLaren of Australia to win by unanimous decision after three rounds. McLaren had great difficulty taking the bout to the ground, as Akhmetov utilized his Greco-Roman wrestling to control the action in the clinch. On the feet, Akhmetov found a home for his left hook on McLaren’s chin, as he connected cleanly on multiple occasions. In the end, all three judges saw the bout in favor of Akhmetov.

Muay Thai icon Rodtang “The Iron Man” Jitmuangnon continued his winning ways as he eked out a tough split decision win over France’s Hakim Hamech in a ONE Super Series Muay Thai contest. The two-world class strikers stood toe-to-toe for the action-packed bout, thrilling the crowd with their crisp combinations. In the end, it was Rodtang who earned the close decision.

Former WBC Muay Thai Super Bantamweight World Champion Joseph “The Hurricane” Lasiri of Italy notched his first ONE Super Series win after edging out Japan’s Hiroki Akimoto via majority decision. Lasiri started out strong and had Akimoto on the defensive in the opening round. Akimoto battled back and made it an exciting back-and-forth contest in the succeeding rounds. After three rounds of action, it was Lasiri who came away with the victory.

Japanese women’s atomweight star Mei “V.V.” Yamaguchi bucked a slow start and scored a third-round submission win over Russia’s Kseniya “The Tigress” Lachkova. Lachkova’s height and reach proved to be a problem early for the DEEP Jewels Featherweight World Champion, who had trouble closing the distance. In the third and final round, Yamaguchi was able to take Lachkova down and secure a deep armbar for the slick submission win in front of her hometown crowd.

Multiple-time Brazilian Jiu-Jitsu World Champion Garry “The Lion Killer” Tonon of the United States made easy work of Indonesia’s Anthony “The Archangel” Engelen. Tonon closed quarters on Engelen early, taking him down with a swift double leg in the opening moments of the featherweight contest. On the mat, the American truly shined, transitioning to various dominant positions whilst remaining in full control of the action. With less than a minute to go in the first round, Tonon secured Engelen’s back and pounded him out to win by technical knockout.

2-time Muay Thai World Champion Panicos Yusuf of Cyprus and Mohammed “Jordan Boy” Bin Mahmoud of Malaysia put together an exciting three-round ONE Super Series Muay Thai contest. The two bantamweights traded powerful combinations all throughout the bout, but it was Yusuf who landed the more telling blows. In the end, all three judges scored the bout in favor of Yusuf to win by unanimous decision.

A spirited clash between two lightweight hopefuls ensued to kick off ONE: A NEW ERA. After a few moments of solid action on the feet, South Korea’s Yoon Chang Min locked in a deep rear naked choke to force India’s Bala Shetty to tap with less than a minute to go in the first round.

Official results for ONE: A NEW ERA