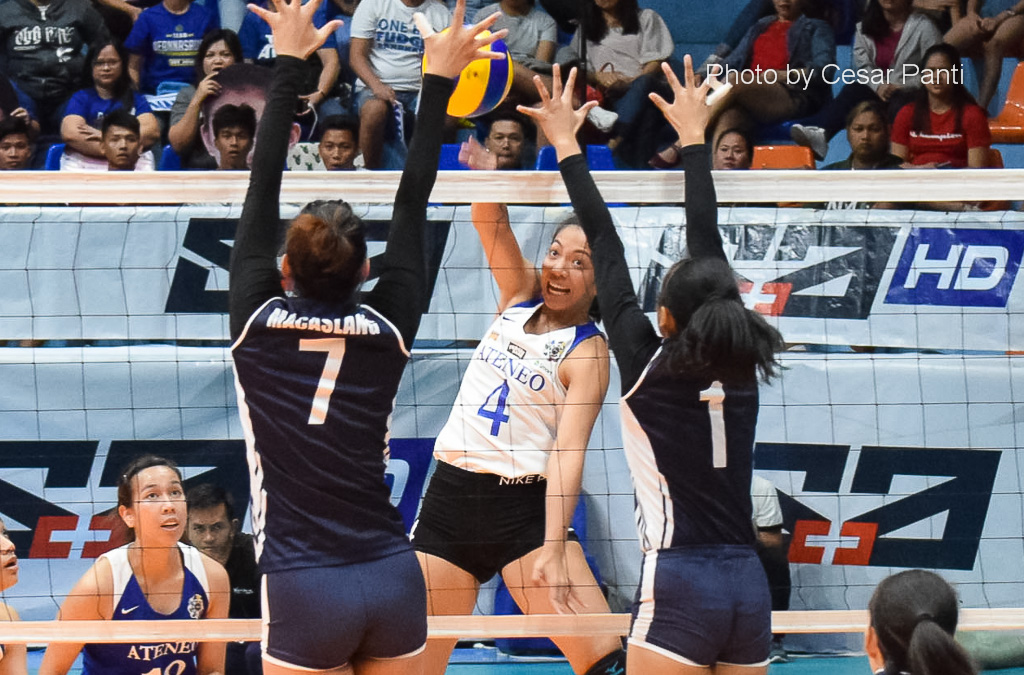 The Ateneo de Manila University Lady Eagles finalized their entry in the semi-finals with a twice-to-beat advantage after taking down the Adamson University Lady Falcons in straight sets, 25-16, 28-26, 25-17, in the UAAP Season 81 women’s volleyball tournament, Wednesday at the FilOil Flying-V Arena in San Juan.

After a disappointing loss in their previous match against their archrivals, Ateneo came out strong in the first set with a convincing win. However, they struggled in the second frame after the Lady Falcons were able to drag the Lady Eagles in an extended set.

Fortunately for Ateneo, Ponggay Gaston delivered the goods with a through-the-block attack followed by a well-placed shot off a misreception by Adamson for a 2-0 lead in the match.

The Lady Falcons responded with a 3-0 start in the third set, but Ateneo wasted no time in closing out the match in straight sets for their eleventh win this season that solidified their hold of the top spot in the standings.

Kat Tolentino bounced back from a subpar six-point performance against La Salle and tallied team-high 17 points for Ateneo, while Maddie Madayag chipped in 13 markers. It was a special victory for the Lady Eagles after clinching another semis bonus which they lost last year as they eventually missed the Finals after six seasons.

Bern Flora and Chiara Permentilla carried Adamson with 9 points apiece as they remained at the bottom of the standings with a 1-12 win-loss record.