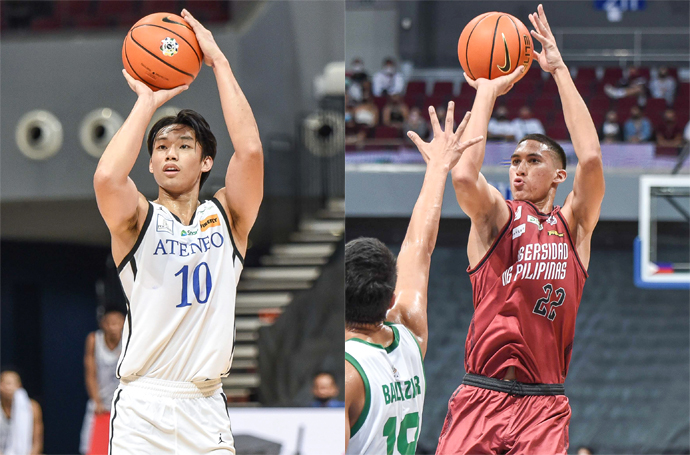 The squads from Katipunan continue to dominate the UAAP Season 84 men’s basketball tournament. The Ateneo de Manila University (ADMU) stays unbeaten, while the University of the Philippines (UP) clinches solo second in the team standings after a thrilling set of games on Thursday, April 7, at the Mall of Asia Arena.

Lucero’s stellar performance shone in the final two minutes of the game. His go-ahead layup at the 1:48 mark boosted UP for a 61-59 lead. That proved to be the finishing touches needed to seal the win as La Salle’s Mike Phillips’ floater did not make it in the final 3.8 seconds in the game.

Lucero was the lone double-digit scorer, while Carl Tamayo and CJ Cansino contributed nine points each, as UP won their fifth straight game for solo second place with a 5-1 record.

On the other hand, veteran Justine Baltazar led the Green Archers with a 13-point, 10-rebound double-double. Former San Beda guard Evan Nelle added another 13 markers, as La Salle dropped to third with a 4-2 slate.

The National University (NU) bounced back from their loss to Ateneo with a stunning 82-51 win over the University of Santo Tomas (UST).

It was a close game in the first half with UST trailing by four, 31-35, but the Bulldogs went on a 25-9 run for a 60-40 comfortable lead at the third quarter. NU did not stop there as their lead increased by as much as 31 points by the final frame.

“Big win for us, pero syempre we have to move forward. There’s still a game on Saturday, so there’s no time to celebrate kasi kailangan may tapusin na trabaho,” said NU head coach Jeff Napa.

Nic Cabanero paced UST with 11 points as the Growling Tigers dropped to a 2-4 slate.

Gian Mamuyac led the Ateneo Blue Eagles past the University of the East (UE), 94-72, to keep their winning slate of 6-0 in the tournament, and keep the Red Warriors winless in the process.

Mamuyac had a career-high 21 points on 4-of-7 shooting from downtown, along with nine rebounds. Ange Kouame added a 21-point, 13-rebound double-double, and four blocks that kept UE at bay.

Ateneo had a slow start, and trailed UE by five, 10-15 in the first quarter. ADMU answered back for a 24-18 lead, but the relentless Red Warriors came back with a 21-15 run for a 39-all deadlock at halftime.

UE kept a four-point advantage in the third, 48-44, until Mamuyac unleashed 13 straight points that gave Ateneo a comfortable 65-55 lead in the third. The Blue Eagles never looked back as their lead ballooned up to 26 points, 90-64 in the last four minutes of the game.

“They had a tough day today, but everybody again is seeing quality of that NU team,” said Ateneo coach Tab Baldwin. “We have to get ready, we have to prepare and we have to come out, play well.”

Harvey Pagsanjan and Kyle Paranada had 15 points each for UE.

“First of all mixed emotions for me. I’m happy with the win, but you know when the final buzzer sounds they didn’t even react, then nanalo na kami walking to the other side of the court. Nakita ko yung kapatid ko so medyo mixed emotions,” said FEU coach Olsen Racela on winning in their first game against Adamson coached by his brother Nash.

Jerom Lastimosa nailed a triple for Adamson with 20 seconds left for a 65-63 lead, but with only 8.9 seconds to go, Abarrientos’ clutch trey sealed the deal for the Tamaraws to improve to a 3-3 record in the team standings.

Lastimosa paced Adamson with 16 points, six rebounds, and three assists. They dropped to a 1-5 slate.