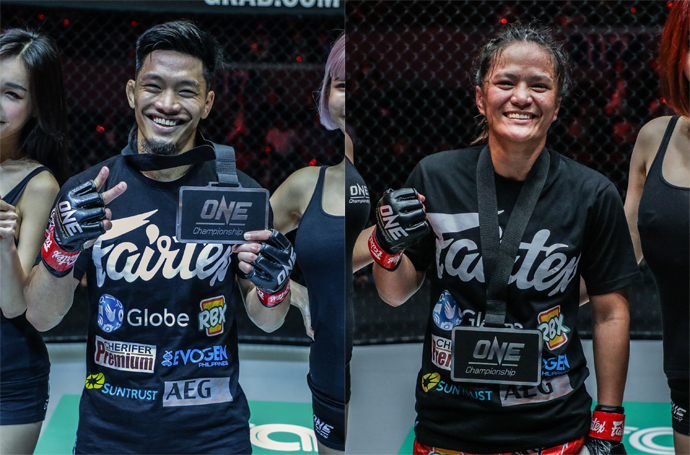 PASAY — Fabled Benguet gym Team Lakay get its ground going for a homestand in ONE Championship: Fire and Fury as strawweight Lito Adiwang and atomweight Gina Iniong scored huge wins at the Mall of Asia Arena this Friday evening.

The duo got contrasting wins in the lead card to give the headlining Edward Folayang and reigning ONE Strawweight king Joshua Pacio a huge morale boost heading into the main card.

Showing her kickboxing form that made her a Southeast Asian Games champion, Iniong put showed why she was nicknamed Conviction, putting a premium on her ground game for an easy unanimous decision win over Asha Roka in their atomweight contest, with numerous takedowns set the tone in which the Indian had no chance.

On the other hand, Adiwang brought the lightning as the Thunder Kid forced Thailand’s Pongsiri Mitsatit into submission in just three minutes and two seconds.

Adiwang’s striking game in the opening minute set the tone for the entire bout that got the MOA crowd roaring, with his flying knee caught the Smiling Assassin by surprise.

Not contented with the punches, the Warrior Series alumnus showed why he deserved the ONE contract by locking out Mitsatit via Kimura that forced referee Kemp Cheng to call into a halt with 1:58 remaining in the opening round, wining his seventh straight bout in the process.

In contrast to Lakay’s twin wins, Catalan Fighting System’s Jomary Torres saw her atomweight bout with Taiwan’s Jenny Huang ended in a no contest as the latter was penalized for repeated illegal blows.