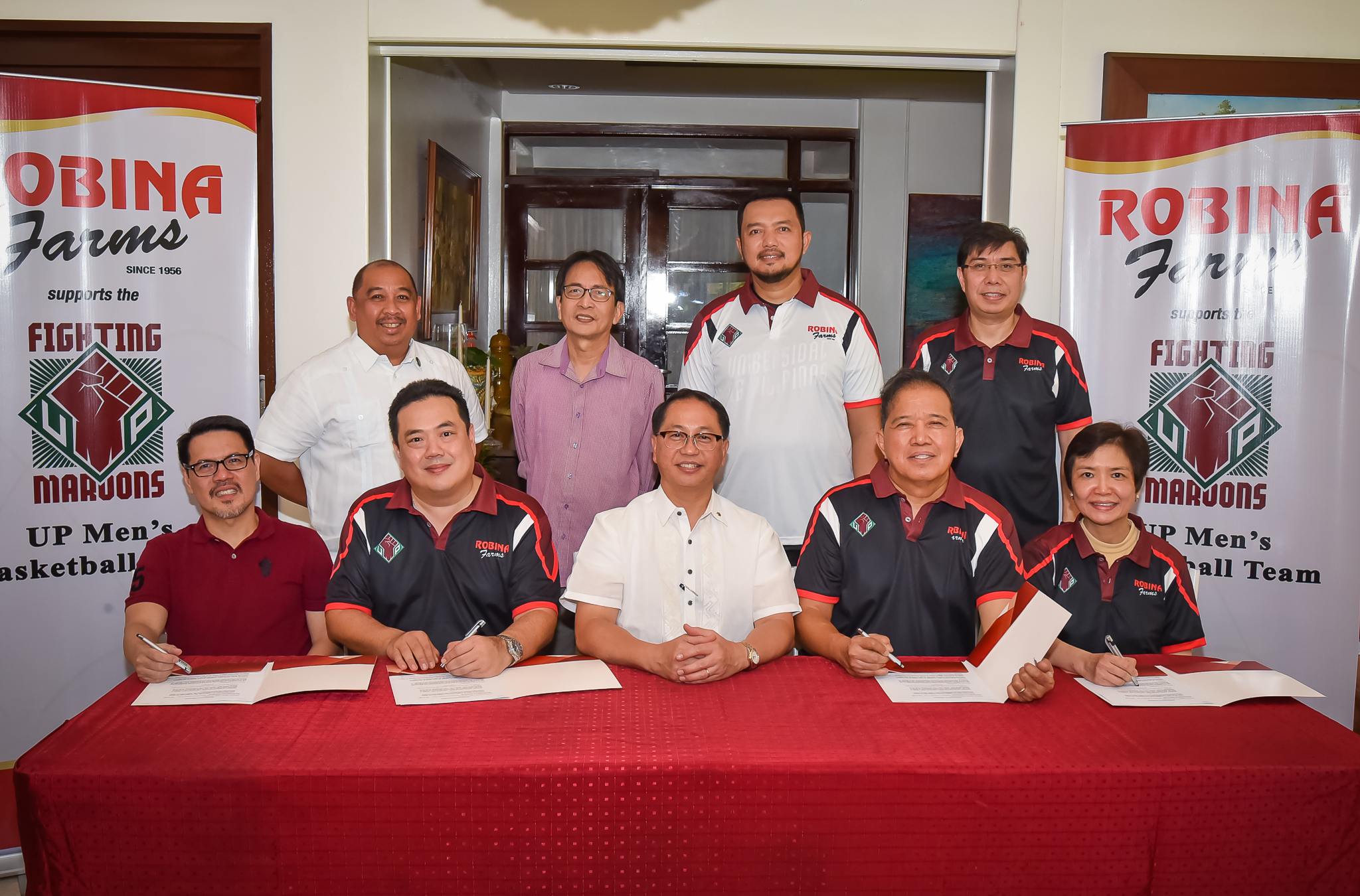 The University of the Philippines (UP) Fighting Maroons will continue to get valuable support from their most loyal and staunchest supporters, the Robinsons Retail Group and Universal Robina Corporation’s Agro Industrial Group (URC-AIG), as they continue their build-up for the upcoming UAAP season and beyond. They officially renewed their partnership recently with Robinsons Retail Holdings, Inc. President and CEO Robina Gokongwei-Pe, and URC-AIG Group Business Unit General Manager Vincent Henry Go, and UP Fighting Maroons Team Manager Agaton Uvero and Head Coach Bo Perasol signing the Memorandum of Agreement at the UP Executive House in Diliman, Quezon City.

Robina Gokongwei-Pe, a UP alumna and avid backer of the Fighting Maroons involved Robinsons Supermarket and Handyman as Fighting Maroons supporters in 2010. Even as UP went winless and won only a total of three games in four seasons (2010-2013), Robina and her group stuck it out with the country’s premier state university in its quest back to relevancy in the field of sports.

More recently, Universal Robina Corporation’s Agro- Industrial Group, through its premium farm products unit Robina Farms, was added to the companies that threw its support behind the Fighting Maroons.

“We firmly believe that the UP Fighting Maroons shares the same values as us, such as passion for excellence and loyalty to our stakeholders. As we renew our official support for the men’s basketball team, we want them to continue to imbibe the same things that our company lives by as they seek to surpass last year’s achievement. This upcoming UAAP Season 82, it would be another great privilege to stand by this team together with the whole UP community. Hoping to exemplify ISKOs values of honor and excellence in every endeavor” said Vincent Henry Go of AIG’s Robina Farms.

“UP’s run last year is proof that everything is possible,” said Universal Robina Corporation – Agro Industrial Group’s Marketing Director Jonathan Diño. “Hopefully, this year’s team will build on what Batch 81 started and bring home the UAAP Championship for the first time since ’86. It’s UP’s time! They should take it. They deserve it.”

“We’re always grateful for all the support we have received from our alumni, especially from Ms. Gokongwei and her group of companies, who have been with us through our ups and downs. This team knows what it’s like to be at the bottom, to lack basic necessities like food and allowances. We are thankful for the faith and loyalty of the Robinsons Retail Group,” said UP head coach Bo Perasol.

The Fighting Maroons fresh from their Championship run in Taiwan’s Buddha’s Light International Association (BLIA) Cup coupled with offseason trainings in Las Vegas and Japan, look to give back to their supporters in Season 82.