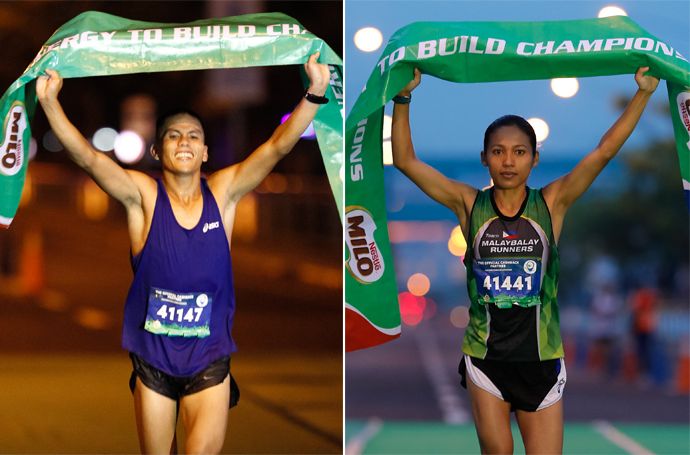 Both Anthony Nerza and Christine Hallasgo battled not just aches and pains as they won the opening leg to kick off the 42nd Milo National Marathon series last Sunday at the Mall of Asia Grouds.

The pair not only notched the top prize of fifty thousand pesos and a slot in the National Finals in Tarlac Next year, but they also shot themselves into the contention for the spots in the national team which was first filled in by Mary Joy Tabal and Jerald Zabala for the upcoming Southeast Asian Games which will happen here.

For the Bukidnon native, Hallasgo had to battle time as she only got two weeks to prepare for the race, but she retained the crown with relative ease as she was the lone woman to cross the line in under three hours and ten minutes.

A protege of the fabled Eduardo “Vertek” Buenavista, she added that even with the short time, the goal of winning came without any glitches in sight.

The Bukidnon mother, who is already in to Team Pilipinas in the SEAG tilt owing to her wins in the quarter (10K) and half (21k) in the PATAFA National Open, but the win will be a good problem for them if she gives the full marathon a shot.

Meanwhile, Airman 2nd Class Nerza had to come from the back door and take the men’s title away from veterans Richel Laguido and Jeson Agravante, as he kept his own paced and proceeded to kick into higher gear when it mattered the most.

It turned out to be huge decision that paid huge dividends, as Nerza pulled away in the final nine kilometers, despite having an excruciating foot pain, with Laguido being left behind for a huge win, his first in the full marathon.