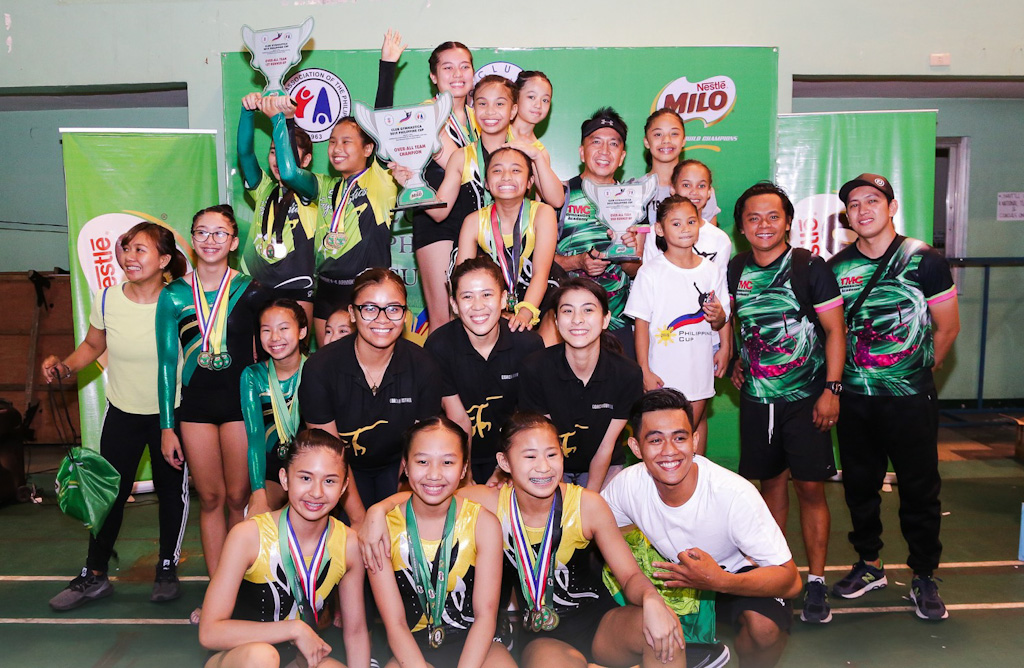 Manila, Philippines, 11 March 2019 – An inspiring showcase of girl power was on display in two prestigious competitions as Club Gymnastica’s Philippine Cup and BEST Center’s Women’s Volleyball League (WVL) each recognized a new roster of female champions in their respective tournaments. Supported by leading beverage brand MILO, both events saw hundreds of contingents nationwide vie for the highest stakes in gymnastics and volleyball.

For over 30 years, MILO continues the tradition of supporting grassroots sports programs by working with esteemed institutions such as Club Gymnastica and BEST Center, to cultivate sports among young Filipinos. The Philippine Cup and WVL both have a longstanding history of champion-building for women athletes, which resonates strongly with MILO’s commitment in getting children into sports.

“MILO is steadfast in inspiring young Filipino athletes to discover their potential and strive for athletic excellence in the grassroots level,” said Lester P. Castillo, MILO Sports Executive. “We are delighted to continue our partnership with Club Gymnastica and BEST Center in celebrating the achievements of these talented young girls. Competitions such as these will not only inspire more young athletes to play competitively, but also help them to develop the values of discipline, respect, and teamwork.”

More than 100 athletes out of 300-plus contingents made the top ranks in the Philippine Cup. Twenty teams from different gymnastics clubs, schools, and universities went head-to-head for the Levels 1 to 6 of the Women’s Artistic Gymnastics.

Among the standouts are the young athletes who have made herculean feats in the individual all-around, floor, beam, bars, and vault events.

Overall, the Poveda Gymnastics Team soared to the top with two gold and four silver medals, totaling to 17 medals. Meanwhile, St. Paul College Pasig College Pasig came close with two gold medals, one silver medal, and a total of 18 medals. The Making of the Champions, not far behind, secured third place with one gold medal and a total of four medals.

Organized by renowned gymnastics organization Club Gymnastica, the Philippine Cup is a premier national competition which caters for experienced-beginner up to elite level for Women’s and Men’s Artistic Gymnastics.

Club Gymnastica is one of MILO’s indispensable partners in promoting the development of gymnastics in the Philippines, through programs such as the MILO Summer Sports Clinics. SEA Games representatives Kaitlin De Guzman, Katrina Evangelista, Cristina Onofre, Mariana Hermoso, Reylan Capellan are among the decorated gymnasts that came from Club Gymnastica and MILO’s sports programs.

King’s Montessori Team A was declared champion of the 18-Under Competitive Division match, with Arellano University Team A as the runner-up. Rounding off the podium finishes are Escuela De Sophia of Caloocan, Inc. (3rd Place), and Chang Kai Shek College (4th Place).

In the Developmental Division, Holy Family School of Quezon City, Inc. and Jubilee Christian Academy, on the other hand, reigned supreme in their respective 18-Under and 13-Under age categories.

Holy Family School dominated as the champion of the 18-Under Developmental Division, with Colegio San Agustin Makati as the runner-up. Under the same event, Colegio De San Lorenzo took the third place, and Saint Pedro Poveda College got the fourth place.

Individual awards were also given to players who have performed outstandingly throughout the competition. The Most Valuable Player Award was each given to: Lucille May Almonte of King’s Montessori (18-Under Competitive), Erin Feliz Navarro of Holy Family School (18-Under Developmental), Sandrine Victoria Escober of Escuela De Sophia of Caloocan (13-Under Competitive), and Ashley Marie Chiong of Jubilee Christian Academy (13-Under Developmental).

The BEST Center WVL is one of the most prestigious inter-school volleyball competitions in the country. An active partner of MILO, the BEST Center WVL has a long heritage of discovering and cultivating athletes we know today, such as Mika Reyes of Petron, Bea de Leon of Ateneo De Manila University, Michelle Gumabao, among many others.