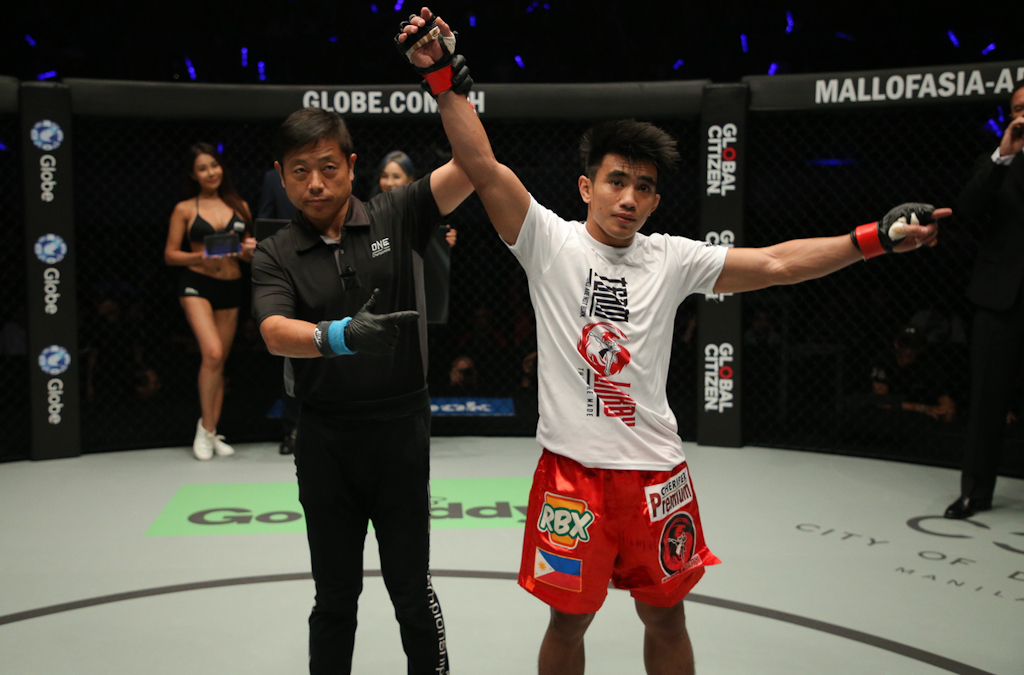 At ONE: ROOTS OF HONOR on 12 April, Joshua “The Passion” Pacio will do his best to regain the ONE Strawweight World Title when he faces Japan’s Yosuke Saruta in a rematch.

This time, Pacio will be competing in front of his countrymen as the event will be held in the Philippines.

It’s the co-main event that also features the return of ONE Featherweight World Champion Martin “The Situ-Asian” Nguyen.

Here is how Pacio got here.

The Japanese veteran has been a thorn in Pacio’s side throughout his career. Pacio was just 21 years old when he locked horns with Suzuki in 2017 at ONE: KINGS & CONQUERORS.

While physically talented and filled with a warrior’s heart, Pacio lacked the seasoning and well-roundedness to take on such a challenge at that stage of his career. To put it plainly, he ran into a buzzsaw on that evening and lost via submission in a little over three minutes of the first round.

Clearly, Pacio learned a lot from this experience as he went on the best run of his career after the defeat.

The strong build for Pacio as a serious title contender might have begun with this memorable KO win over Doliguez. Less than a minute into the second round, Pacio fired the strike heard around the world. It was a dynamic spinning backfist that caught Doliguez flush and led to the KO victory for Pacio.

Coming off a disappointing and humbling loss at the hands of Suzuki, this was just what “The Passion” needed to regain momentum.

Could Pacio continue his run against Ming? You bet. Pacio’s best quality is his submission skills and this match served as a reminder for anyone who might have forgotten.

It took just four minutes for Pacio to take Ming’s back, sink in the choke and force the submission.

The victory was Pacio’s second in a row, and the second time he’d forced an opponent to tap to a rear-naked choke. This win also took place as the co-main event on the card, which served as a sign of Pacio’s ascension back up the ranks.

Six months later, Pacio was back on the preliminary card, but he didn’t allow that to dampen his performance. He’d been previously scheduled to face Mitsatit rather than Ming in his last bout, but the match was canceled and ultimately rescheduled for this card. Pacio’s submission game was again the star of the show.

Pacio used an inverted kimura to force the tap in this bout, a move he and his fans fondly referred to as “The Passion Lock”.

With each passing bout, Pacio was making himself more of a prolific finisher. This finish was his 11th in 12 professional wins. It also set him up for a title shot and a rematch against one of the two men who owned a victory over him.

More mature and balanced as a martial artist than he was the first time he faced Naito, Pacio was ready to capture the prize that had eluded him previously.

Back in October 2016 at ONE: STATE OF WARRIORS, prior to the loss to Suzuki, Pacio was submitted by another Japanese veteran in Naito.

In the rematch, Pacio’s submission defense and striking were nearly aligned. He kept himself mostly out of precarious situations and earned a hard-fought unanimous-decision victory and his first world title.

In the process, Pacio also avenged one of his two pro losses. It seemed as if he had struggled against Japanese opponents, but perhaps this was the end of that problem. His next title defense was supposed to allow him to even the score with Suzuki, but things didn’t work out as planned.

Originally, Pacio was to face Suzuki in a rematch with the former’s newly captured ONE Strawweight World Title on the line. Unfortunately, an injury knocked Suzuki out of action. He was replaced by another countryman, Saruta.

Quite frankly, Saruta wasn’t given much of a chance to defeat Pacio, but this is why contests aren’t conducted on paper.

The Japanese Shooto veteran with 29 professional bouts under his belt proved he did not come to the cage just to participate. Saruta came to win, and after the judges rendered a split decision in his favor, that’s exactly what he did.

Prior to the match with Saruta, it seemed the only thing that could derail Pacio in his bout with the replacement opponent was overconfidence.

Perhaps that’s what got to him in January, or maybe Saruta truly is just the better mixed martial artist. We’ll find out for sure at ONE: ROOTS OF HONOR.