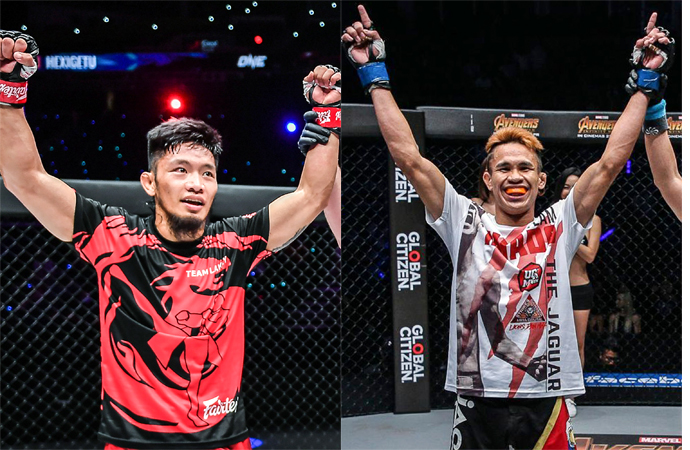 Alongside big names in the organization the top Filipino strawweight fighters are in for a night inside the Singapore Indoor Stadium in front of a capacity crowd for the very first time since the COVID-19 pandemic.

The announcement on Tuesday was the latest addition to ONE Championship’s historic 10-year anniversary.

Team Lakay’s Adiwang has been making his name echo around the MMA world with explosive finishes, boasting an 85 per cent finishing rate together with four wins from his last six outings.

The “Thunder Kid” has already toppled elite fighters like Anthony Do, Namiki Kawahara, and Pancrase Champion Senzo Ikeda in his 13-4 fighting record.

Adiwang is looking to bounce back from a tough loss against no. 2-ranked strawweight Jarred Brooks.

On the other hand, “The Jaguar” has been on a streak lately despite being away from the Circle for a while.

Miado is coming off a two-fight win streak against Chinese Miao Li Tao – both in a scintillating knockout fashion – showcasing his enhanced striking now that he is training under Marrok Force.

The Adiwang vs. Miado bout is a rare Filipino-against-Filipino showdown of epic proportions, both very proficient in striking and finishing the night early.

While one fighter is hoping to get back in the winning column, the other will look for ways to continue his streak – and it will all boil down to who strikes harder.